Cardiologist Eric Topol is turning the medical establishment on its ear with his vision of a democratized health care system driven by patients and empowered by “medicalized” smartphones.

He heads the consumer-facing component of the National Institutes of Health’s Precision Medicine Initiative, which aims to harness and analyze a treasure trove of medical data from one million citizen-science participants nationwide.

What could the future of medicine look like?
There has never been such a dynamic and transformative time. We can sequence an individual genome and find the medical essence of each human being, but it’s not just about the genes. We also now have ingenious apps and sensors to record your heart rhythm, blood pressure, and glucose levels. We have artificial intelligence algorithms that can process the multiple layers of our data, including our genome and our environment. These tools are going to make us more efficient and more productive. They will put the patient more in charge of his or her own health, and they will give doctors more time to invest in our patient relationships and in our caring.

How did you first get interested in genetics?
I was enamored with the idea that we could manipulate aspects of our genes. My 1975 college thesis was called “Prospects for Genetic Therapy in Man,” but I didn’t realize it would take us 40 years to get there. Gene therapy is very complicated. We rushed into it in the ’90s, and the early death of a teenager as part of a clinical trial for a rare metabolic disease set back the field research and trials almost 15 years. Now we’re on a solid footing; with newer techniques like CRISPR, we can approach diseases – sickle cell, thalassemia, hemophilia – that were unapproachable before.

What will it take to reform health care in the U.S.?
We could see a consumer revolution – a “Health Spring” – where people start rallying for change. More likely, it will come from the largest companies, which have hundreds of thousands of employees (and their families) and billions in yearly expenditures for their health coverage. We’re learning from countries that use single-payer systems, artificial intelligence, and other tools to create greater efficiencies. My guess is that we will see movement in this country, because right now things are moving in the wrong direction in terms of access and expense. And the burnout, depression, and suicide rates among physicians are staggering.

What’s the coolest part of the Precision Medicine Initiative?
We’re doing well getting people to participate. The tricky part is getting enough underrepresented minorities involved so that we have a diverse pool of one million individuals. The output will be enormous, and we’re going to learn so much. Some of the quick things we’ll learn: What is normal blood pressure? What is normal glucose after eating? We have no idea, because we measure these things in a doctor’s office, which is the most contrived setting. Look what the landmark Framingham Heart Study, a longitudinal study of cardiovascular disease in 5,209 people, has taught us about heart disease – more than any other study in the field. Now we’ll learn so much about health and virtually all medical conditions.

What has been the one constant in your career?
I’ve only had three jobs in my life – at the University of Michigan, then Cleveland Clinic, and now Scripps – and I’ve never had to give up seeing my cardiology patients. I love that, and I have at least 30 minutes with every patient I see. Time, to me, is vital. You can’t be rushing and interrupting people; you have to let them tell their story. 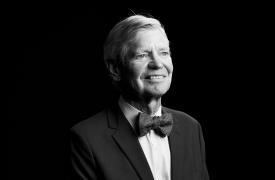 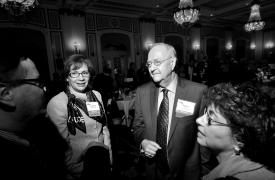 Refocusing the field of ophthalmology

Support the next generation of medical pioneers.
Make a Gift